Three Little Pigs In A Nest Of Four 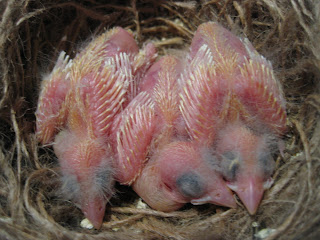 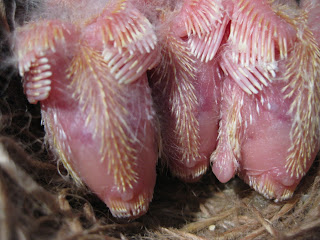 They have not only beautiful rosy pink healthy skin tone but also notice the yellow fat layer deposited under the skin on the rump to the tail! When you see a fat layer on the rump, the chicks are doing very well!! Click on the photo for a better view. 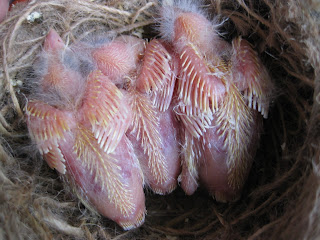 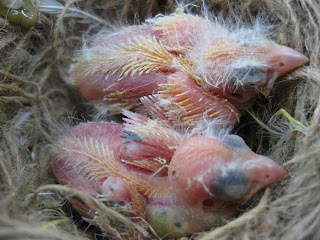 The chick in the foreground with black feathers on each wing just like papa, was losing out. It did not have a fat layer and each day was proportionally smaller than its siblings! With a growing size and personality disadvantage, it is best to move the chick where it can compete more favorably with only one other chick of its size.

If the chick has been banded or like in this case has distinct dark wing feathers, you can easily identify the adopted chick even if it is not banded yet. In other cases, I give the moved chick a hair cut to shorten its downy fuzz on the head so that I can readily tell which chick was moved when I band the chicks.
Posted by Linda Hogan at 12:32 AM

How many baby German Roller Canaries do you have at this stage? Karl

I held my rollers back a bit because I wanted to use the new German male with as many hens as possible, they are just getting started good but I have about 25 so far.