Weaning First Chicks - Getting Them Eating 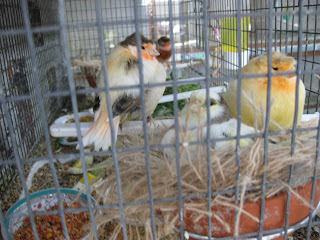 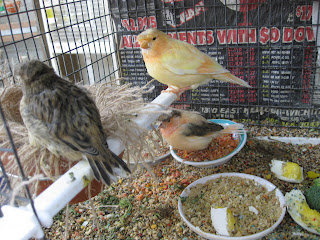 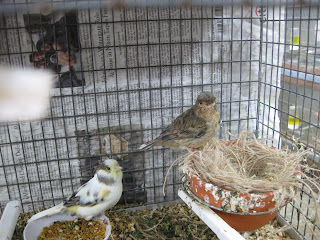 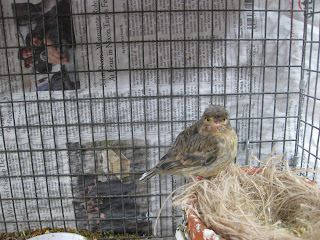 The time to start weaning chicks is when the first chick leaves the nest which in normally developing chicks is about 18 days old. As soon as I see the first chick out of the nest, I add in addition to the usual nestling foods, a quarter of a hard boiled egg. Most chicks will start eating it the same day. They like to nibble on the sharp edge of the yolk. To get the sharp yolk ridge, I cut the egg using a thin blade paring knife and first half the egg and then divide the halves again. This is the first food the chicks will learn to eat and the sooner the better as the hen is likely getting anxious to start a second clutch!

After eating the quartered hard boiled egg and nestling egg food, they will try chickweed seedy heads, sprouted seed, broccoli (pick the heads with the more loose obvious seeds rather than tight heads), romaine and other greens. As soon as they are seen eating the egg and approximately 21 days old they are moved to another cage away from their parents. Providing they are not overly thin and sitting around puffed up, crying all the time. In that case, I move the ready siblings and leave him with the parents a little longer. Some chicks like begging better than eating and can be resistant to eating on their own.

In the weaning cage, I initially remove perches so the chicks will sit on the floor with my smorgasbord of food. They often perch on broccoli as it is the highest thing in the cage and nibble it under their feet. As they eat more, I put perches up about an inch off the floor for a while and then finally to a higher position. The reason is the chicks will sit on the highest perch and watch the food below but not eat it. Eventually, they will start crying and finally puff up, go light and die, all the time looking down at the food!

I watch the chicks to make sure they do not puff up but rather hold their feathers tight to their body. You can also tell a great deal about how the chicks are doing by the width of the tail and wing carriage. Chicks that have a piped tail and good wing carriage are doing well. Wing carriage usually improves first.Wide tails at weaning are usually due to poor eating habits but along with poor wing carriage that persists may be your first alert of a failure to thrive genetic defect problem in the line.

Once in the weaning cage it is time to branch out to eat other dry foods such as dry Quiko, CeDe, ABBA green or red, Proteen 25, Petamne/Harrisons mash, bread crumbs (process some fresh bread or corn bread in the food processor), and even Purina flock raiser. In addition, they will likely eat bee pollen, wheat germ, Lewis Lab Brewer's Yeast flakes, and oatmeal. The easiest one of the dry foods to get them to eat is Quiko. I think it is the flaky texture but it is very easy to get them to eat it.

They are now ready for frozen corn or frozen peas. I just pour hot water over the frozen vegetable and thaw it before serving. The first few times I offer peas, I shell each pea to serve only the tender hearts, once they have a taste for it, they will hull their own.

Once they eat these kinds of foods, I introduce couscous with poppy seed. To make it I take couscous and add poppy seed (health food store, I order 5 lbs at a time) and some olive oil mix and cover with boiling water (extra layer of water on top). Fluff occasionally. Already the birds are eating the poppy seed in the couscous! Today, I am going to try Debbie's shredded wheat and carrot (see earlier Tuesday's Tipster food processor). By next week, I will try the border veggies (broccoli/cauliflower and soybeans),

Do you have a favorite recipe for weaning chicks? Send it as a comment post to this blog.
Posted by Linda Hogan at 7:10 AM

Hi Linda,
I'm a canary novice and learning so much from your blog. First, Can you tell me exactly what "nestling" food is?
Thank you, Emily

Nestling food is another term for the egg food which is given to the hen to feed her chicks. Some are made from scratch while others start with a commercial product such as ABBA green, CeDe, Proteen 25, Orlux, Quiko, and numerous other good brands to which most people add hard boiled egg. It is feed after a pair has mated until the hen lays her last egg in a clutch and then again when the first chick hatches.

It is also one of the weaning foods and I continue feeding it to chicks till after the molt or about middle of September.

Nestling food should not be used to push birds to breed. Some breeders used it very sparingly as part of their conditioning program but it must be used carefully in very small amounts or it will result in a hen laying but not mating and hence infertile eggs.

"Wide tails at weaning are usually due to poor eating habits but along with poor wing carriage that persists may be your first alert of a failure to thrive genetic defect problem in the line."

What do you mean by "wide tails?" What constitutes a wide tail?

By wide tail, I mean the tail feathers are spread out like a fan so that the tail is very wide rather than folded in tight so that it appears narrow in width.

Hmm..that would concern me. I'm a novice breeder, and the first cluches that my birds raised, as I look at them - one pair had 2 chicks, the other had 4 chicks. 3 of the six have tails that might appear to be "fanned." 2 different sets of parents. All eat the same diet...should I be concerned?! Mike

That is great info on weaning chicks. I especially value the info about the wing carriage and wide tail as a sign of poor progress. Thank you!

At the beginning of weaning, most chicks will have a fanned tail because they are not eating well on their own. Once they are getting plenty of good food, the wing carriage should straighten up so the wings meet over the back and the tail becomes narrow rather than wide. Notice the chicks in the picture. They are leaving the nest but not weaned yet and the tails look fanned!

Linda, first of all let me thank you for writing such a thorough book. I refer to it often and love it. My canary fledged the nest at 17 days yesterday. Now it's crying to eat and the parents are feeding it only a few times. Should I supplement it with a syringe? I have put egg, nestling food and dry egg on the floor of the cage for it but it doesn't seem interested. Can you help? Thanks, Joyce.

I have a nest of four young canaries that have left the nest at 21 days. The father does not want to feed them, and the mother is setting on four eggs. They are sleeping a lot and do not appear to be searching for food, even though I see them "nibbling" once in a while. They still cry for their parents to feed them..they are very afraid of me, so I haven't tried hand feeding. I am very afraid that I will lose them. Please give me your advice...and thank you so much!