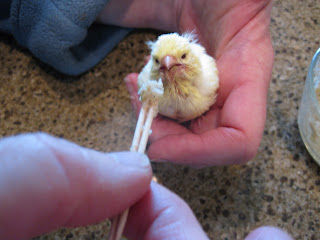 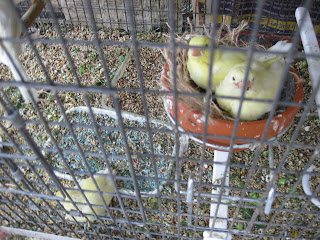 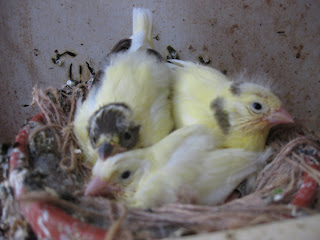 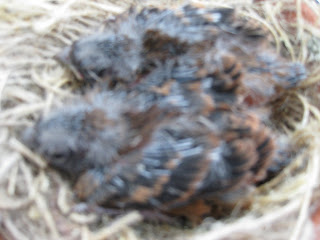 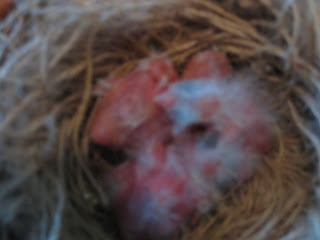 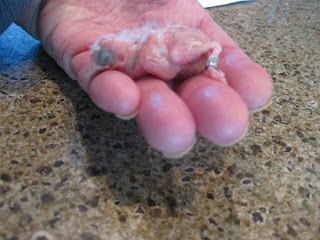 Baby bird has become quite fond of me and now sits in my open hand for a couple of feedings each day. The large two yellow mosaic chicks have returned to the nest but baby bird prefers the floor. The hen is feeding all three, totally the two in the nest, but it is hard to resist feeding baby bird occasionally! Even with all this taming, baby bird will eventually prefer birds to people. I will try to get our connection by offering pieces of bread to it when it is older. Notice their wide eyes now!

The third photo is a nice nest of German rollers. I am especially like the black beak one as I do not think I have ever seen a variegated German roller with a black beak from melanin pigment! Notice also the bird with the dark mark on the side of his neck. This usually means a very good multi-toured bird and one which will produce great offspring regardless of what he scored in the show! Notice also how pipped the chicks are which means they are in excellent condition!

Photo four is a nest of a couple of bronze. The parents are already mating again in anticipation of another nest. Typically, they mate at 14 days. This works well as the chicks are not in the way as they are still in the nest! If the cock is put in later, you may miss getting fertile eggs! Notice how they are trying to hide in the nest like well-fed chicks!

Photo five is the bald Stafford chick which I fostered to a German roller with two chicks. This was a chick that I removed from the shell on the 13 th day, after it had pipped around it but was not coming out. It appeared to be a premature as the egg yolk was quite prominent in the lower abdomen. Seening the egg yolk still visible, I did not force feed the chick, it needed to consume the yolk first! It never did really fluff out over its body but it is growing and doing fine. I have never seen a chick like this one as it was almost a yolker, meaning one which had not taken the egg yolk into its body before hatching. Yolker's usually die. Even at birth, I could see it would be crested as it already showed a pointed head so I did not need to cut what little fuzz it had to be able to identify it at banding time!

Photo six is the chick, who was too small compared to its siblings because it hatched a couple of days later (last Friday's post), so I gave it a hair cut before fostering. I can clearly see the remains of the short fuzz on the sides of the head and had no difficulty assigning its correct parents in the record book!
Posted by Linda Hogan at 9:55 AM