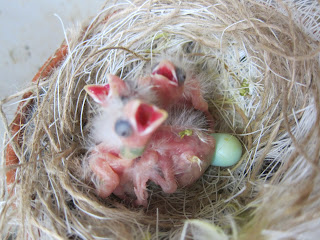 Jonas Vergauwen, A PhD student at the University of Antwerp Belgium, is doing his thesis on The Effect of Yolk Testosterone on Canaries. Needing cover photos for his thesis, he searched the internet and chose a couple from my blog. I was thrilled and ask him for a posting of his research conclusions when he had time and to my surprise he promptly sent this summary for us.


In short, we know that removing eggs causes a delay in development and by returning them on the same day, you will actually invert laying order. This effect is not only supported by yolk androgens, but also by temperature effects on egg development. It is not completely clear yet whether returning all eggs on the same day will increase the survival chances of the entire clutch. It for sure helps the chances of the chicks of the last laid eggs (which typically contain more testosterone in canaries, as testosterone concentrations increase over the laying order), but therefore may even decrease survival chances of the eggs originating from the first laid egg. I will explain this briefly:
Yolk testosterone is believed to increase growth and begging behaviour of chicks. As the yolk testosterone concentration increases towards the last laid egg, it therefore helps the chicks from the last laid eggs to compete for food with their (most likely) earlier hatched and therefore larger sibling in the nest. Faster growth and increased begging behaviour will support its survival chances. However, if you reverse laying order by delaying the development of earlier laid eggs, you decrease early competition in the nest, but still the chick hatching from the last laid egg, has this testosterone driven support on begging and growth (and many more behaviours/traits). So actually, the chances that the last chicks now outcompetes the first chicks are much more increased. I am (personally) therefore not convinced that delaying eggs and returning them on the same day is always the best, as nature development a compensatory mechanism for the hatching asynchrony in the clutch, with which people mess by delaying development. Of course, in canaries, it has to be taken into account that they are highly domesticated, that breeders have been applying this “delaying method” for years and there is abundance of food available in the cages, which again counterbalances the negative effects of delaying egg development. Canaries may have been well adapted to these strategies. That is exactly why I think the benefits or costs of egg delay are not entirely clear yet. I again underline that this is a mixed scientifically supported and partly personal opinion, but worth thinking about it, I guess. My feeling tells me: Mother Nature knows best.

Thank you so much Jonas for sharing with us!
Posted by Linda Hogan at 6:57 AM

Thank You for sharing those amazing facts. You are right - Mother Nature does know best.

I no longer pull eggs, mainly due to morning-time rush. I cannot say that it has made a huge difference either way.

Would be interested in other breeders comments on this.

I generally do not pull eggs during the early season as my aviary is a little cold and I do not want them being chilled. When the fertility is high and the number of eggs is high 5 or 6, in the past I would be pulling the eggs.

This year I am very concerned about the drought and low humidity which could cause the eggs to dehydrate at room temperature. I am going to try and set up more in groups to give me more fostering options. I have also just bought a large crock pot that I am keeping water in and turned on low with the lid off.