Born On The Fourth Of July 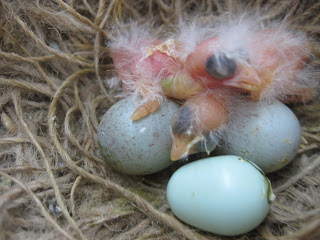 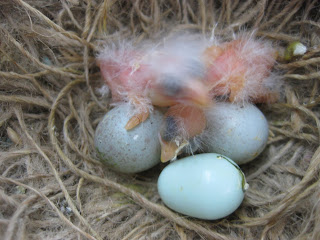 These German rollers chicks are Yankee Doodle Dandies for sure as they were born on the Fourth of July!!

This ties the latest date I have ever hatched chicks! I still have a few more that might hatch but problems abound for late hatches!

The hen had three fertile eggs but by noon on the 14th day, July 3rd, none had hatched. I tried floating them in warm tap water and only one wiggled.. I tried the other two eggs in hotter water but still no moment. I opened first one and then the other fertile egg and the chicks had not developed adequately likely because of the hen's poor incubation temperature. The eggs were barely warm in the nest.

Another German roller hen was due on the 4th so I moved the live egg from the hen with poor incubation temperature over to the other roller as her eggs felt pretty warm. Typically, chicks in underdeveloped eggs who are still alive by noon on the 14th day when moved to better incubation will hatch on the 15th day. If not moved this live chick will die in the shell like its two siblings. By moving that live egg, two chicks hatched on the 4th of July! Boy did that get me singing the jingle!!!

Hatching was only the first hurdle. Often hens wait a few hours to start feeding new hatches but the incubating hen failed to feed the two chicks them at all by late afternoon on the 4th I took a chance and moved them under the hen who couldn't hatch her fertile eggs and she is feeding them! Looks like this late hatch project takes a village to get it done!!
Posted by Linda Hogan at 7:56 AM

I have three hens due to hatch Friday. Definately the lates I have ever bred youngsters, but the wild birds here are doing the same thing. Go figure! I know what you mean. Late hatches can be hard to get through to perch. Wish us both luck!

What does Richard mean by the comment 'hard to get through to perch'? Janet

So many things will go wrong so even hatching is not equivalent to raising them up.

Several things go wrong: 1. poor incubation temperature leads to dead in the shell, 2. if they hatch, even hens who fed prior nests well, feed poorly, if at all, 3. Many poorly fed chicks will fall out of the nest and may die from hypothermia, 4. Hand feeding may fail as chicks may get crop infections etc.

This late in the season, the breeding condition/motivation of parents can ebb. I bought more Exact and plan on using it.