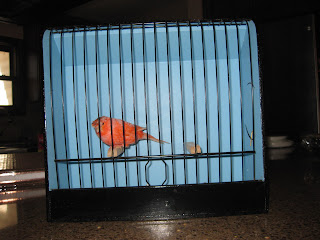 Bachelorette, a Stafford Canary, has a frost feather type. 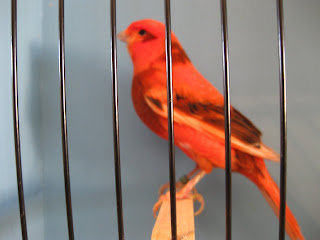 Gator Heat, a Stafford Canary, has the non-frost feather type and in this unflattering photo, the feathers appear too long. Note the bird proportions, it appears to have a long tail and long wings. If Gator Heat see this, he will surely demand it be deleted as he is really a handsome fellow! 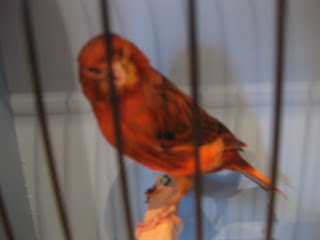 Sooner, a Stafford Canary, has the non-frost feather type but in a shorter length. Note the shorter tail and wings. 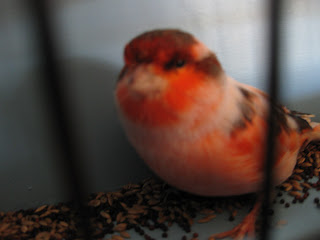 Shocker, a Stafford Canary, has the mosaic feather pattern. 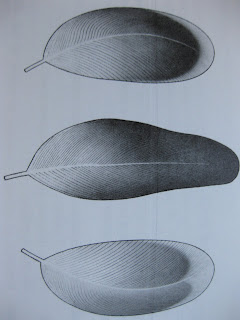 Canaries have three basic feather patterns as shown in the above diagram by Walker and Avon. The top feather is wider and has no coloring on the tip. This feather type has many names depending on the kind of canary. In Stafford canaries and colorbred it is called frost, but in type canaries the same kind of feathering is called buff.

The next diagram pattern in the middle is colored to the very tip. In Stafford canaries it is called non-frost, while in colorbred it is called intensive. In type varieties, it is called yellow (feather pattern) and is not related to the bird's feather (ground) color.

The bottom diagram pattern shown by Walker & Avon is mosaic feather type. It has a much larger area without color. Mosaic canaries are shown in both Stafford and Colorbred (lipochrome and melanin) divisions.

When feathering gets too long, the wings and tail get too long and the secondary flight feathers eventually will not be in line with the other wing feathers. This is more evident in the second year when feathers are naturally a little longer. If you have the long feathering problem, select breeder males with shorter feathering that are two years old or older.

When feathers get too long and too wide, they may not be able to break through the skin and become feather lumps. Lumps must be removed but will come back unless you feed them lots of different amino acids and especially methionine. Mosaic canaries are more prone to lumps if the feathering is allowed to get long, as it is already wide. Sooner, with its short and narrow feathering, is a perfect feather type to back the length and width up a bit when you are getting too close to breeding birds with lumps!
Posted by Linda Hogan at 7:31 AM