Slimming Down the Cocks 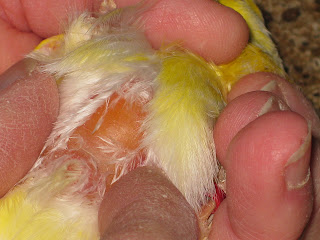 As I took care of my birds this morning, I noticed that my prize imported German Roller cock who normally has a "Dolly Parton" chest was even more chesty than usual!! Upon closer examination, his vent has started to develop but so has a huge yellow fat layer! The glossy abominal skin indicates he is in good condition but he is too fat.

Cocks need a very thin yellow fat layer to be fertile but too much fat layer impedes fertility. Taking action immediately is important to a successful breeding season.

Obese cocks need to have more exercise. You can move them to large flights, or make them move more in their cage. These fat cocks only get two high placed perches in their cage. The water is placed with a high perch and food is on the floor. In addition, having at least three cocks in their cage will encourage them to move more. Having other cocks in the cage not only encourages them to move more, but also to defend their territory. Defending territory is one of the most important conditioners for cocks.

The best fat reducing diet is to feed them only vitamin-treated water and petamine breeding formula. This gives them a high protein and low carbohydrate "Adkin's" diet. Petamine is a complete diet. During show season, I use the petamine diet to correct loose feathering and improve conditioning. I get my petamine breeding formula from Herman Bros Pet Products in Marine City, Michigan. (phone: 810-420-5055)

This week I will inventory and check the development and fat layer on all of my birds. Where obesity in cocks is undesirable, being pleasantly plump is desirable for hens!

Another alternative is to feed untreated grass seed. This is also very effective.

Shawn: Hard boiled egg is a good idea if it is a breed like rollers that do well on high amounts of protein. It is a bad idea for Borders. check out my balance problem recent article July 2014. I was not able to post directly on your comment here so I am moving your question to Questions For Big Bird July 22, 2014.
Posted by Linda Hogan at 11:04 AM

Quite apart from the birds, I will probably have to start this low Carb/Petamine diet myself! Having just been to my GP last night, where he informed me that my "fatty liver" (which showed up on some ultarsounds I had done), was like that of a chronic drinker.
Which was a bit of a shock, considering I drink very rarely and only in knowledgable quantities!
But back to Canaries! I will certainly try out your diet. To be honest, it hadn't occurred to me to use soluble vitamins to compensate for reduction in food intake.

Pleasantly plump is a nice phrase!
I agree, hens are much better like this at the start of breeding.

I need urgent assistance please. I have a new bird come into my aviary who is obese. As luck would have it, I would really like to breed him to as many hens as possible using the striker method. However because he is overweight he isnt near breeding condition as opposed to my other cock birds. He doesnt even sing! I need to slim him down urgently.. Petamine is not available in South Africa, but I was thinking to feed him a 1/4 boiled egg as a substitute for high protein. I will also house him with one other overweight male in a double breeder with only two high placed perches. Do you think the egg will be good enough to reduce the weight? My birds are normally ready to breed by middle September..